Articles and sites about the building 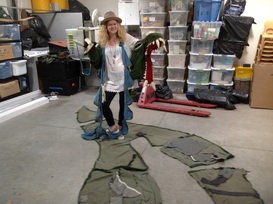 For decades, MCDS students have visited the library to listen to stories read to them under the watchful gaze of a stuffed dragon.

The first dragon appeared in the late ‘70s and soon became a beloved fixture in the library.  Over the years the story reading room came to be called, affectionately, the Dragon Room.

The dragon became the favorite “seat” for kids during story time (the head being the preferred location!).  Over time the resulting wear and tear meant that the dragon had to be replaced over the years.  Prior to the start of construction of the current library, the remnants of the dragon were packed away.  Once construction was completed in 2010, a small ceramic dragon was placed in the Dragon Room in the new library.

Still, the space needed something larger and more inspiring.  So, we were thrilled when alums Zio Ziegler (’02) and Lorna Gaddis (’97), agreed to each use their artistic talents to conjure two new dragons for our school library!


Zio’s bold graffiti-style murals can be found in San Francisco and major cities all around the world. When Zio came to MCDS as a visiting artist in the spring of 2013, we asked him to work with our students on ideas for a dragon mural for the new Dragon Room. The resulting dragon mural spans an entire wall of the room (which is located on the lower level of the Learning Resource Center).  Working free hand and using black spray paint, Zio created the mural over the course of a single day as students watched, captivated, through the exterior windows of the Dragon Room.

Just outside the door to the Dragon Room, the “flying” 18-foot dragon crafted in spring 2014 by alum Lorna Gaddis (daughter of MCDS Librarian, Tessa Gaddis) hangs dramatically from the rafters of the Learning Resource Center. During a recent visit to MCDS, we asked Lorna, who attended the Pratt Institute and has a background in fashion and costume design, if she’d be willing to create a new stuffed dragon for the library using whatever bits and pieces could be salvaged from the old dragon that was still in storage. Lorna was able to recycle the head of the previous stuffed dragon for this most recent incarnation – blending the old with the new.. An anonymous donation from an alum parent dragon-lover helped make the entire project possible. Many thanks to Lorna and Zio for creating two magnificent dragons to ignite the imaginations of current and future MCDS students!